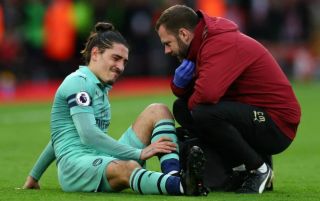 Arsenal right-back Hector Bellerin has provided a major announcement on his injury via his official Twitter account.

The Spain international recently suffered an anterior cruciate ligament injury to his left knee in the win over Chelsea, and a lengthy spell on the sidelines seems likely.

However, one positive seems to be that Bellerin has now tweeted that his surgery has been a success as he posts this picture looking pretty cheerful in his hospital bed…

Surgery = success. Big thank you to all the doctors and physios who worked so hard to get me ready for surgery and through it with such ease ?? pic.twitter.com/Jl8oNUptCB

Arsenal fans will be hoping Bellerin can return as soon as possible as the likes of Stephan Lichtsteiner and Ainsley Maitland-Niles don’t look the most reliable backup options for the club for any lengthy period of time.