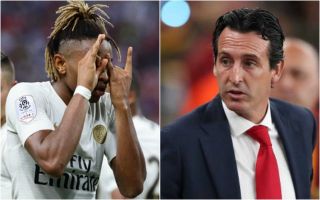 Arsenal are being tipped to try again to seal a transfer swoop for Paris Saint-Germain starlet Christopher Nkunku.

The French youngster has not played much at PSG and was a notable loan target for Arsenal this January, though a deal could not be concluded in the end.

Still, Charles Watts of football.london has just revealed in a transfer Q&A that he would not be surprised if the Gunners went back in for Nkunku in the summer.

Unai Emery, who left PSG for Arsenal in the summer, knows Nkunku well from his old club and the versatile star was also a target for Arsene Wenger in the past.

‘I can see them going again for Nkunku,’ Watts said.

‘They’ve been looking at him a long time, from before Emery arrived even.

‘He was always viewed more as a summer target anyway, they just fast-tracked it because needs must. So I wouldn’t be at all surprised if they went back in for him.’