Manchester United winger Anthony Martial has a better record than club legend Cristiano Ronaldo had after the same amount of games at Old Trafford.

The Frenchman committed his long-term future to the Red Devils on Thursday, signing a new £250,000 per week contract which will keep him in Manchester until at least 2024 – as per the Daily Mail.

United have endured a difficult 2018-19 campaign so far, slipping out of the race for the Premier League title back in October under then boss Jose Mourinho and struggling to reach the high standards history has set for the club.

However, Martial has been one of the few bright sparks between August and now, contributing 10 goals and one assist across 25 matches while showing off his impressive dribbling ability and skill in the final third of the pitch.

Since Ole Gunnar Solskjaer took caretaker charge of the club after the departure of Mourinho in December, United have won eight out of nine games across all competitions and Martial has continued to show just how important he is to the team.

At 23-years-old, the mercurial winger is still a long way off his prime years and yet, the statistics show that he is already on course to outshine a former United great – Cristiano Ronaldo.

Martial has scored 32 goals in 104 Premier League matches to date, while Ronaldo only managed 22 during the same amount of games at the start of his career at Old Trafford. 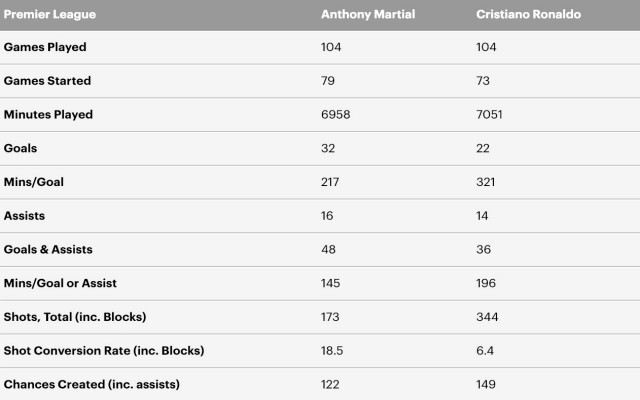 As you can see in the table above, the France international is also ahead of the five-time Ballon d’Or winner in terms of assists and his shot conversion rate of 18.5% is far superior to Ronaldo’s 6.4% at the same stage.

If Martial continues to develop at such a dramatic rate, there is every chance he could end up joining Ronaldo in the hall of fame at Man United, but he still has some way to go yet.

Ronaldo finished his career at United with 117 goals to his name from 290 appearances across all competitions and also managed to win three Premier League titles and the Champions League.

Speaking ahead of his side’s trip to Leicester this weekend, Solskjaer compared Martial to Ronaldo, insisting he should try to model himself on the Portuguese star in order to achieve greatness.

“Cristiano was the best,” the Norwegian began, as per the Daily Mail. “The way he’s changed to now, that’s up to any player if you make a decision on how to develop your own career.

“I spoke (to him) about my experience at this club what he can achieve. You talk about Cristiano’s career, what he’s made, how he’s got there and all the fantastic players we’ve got.

“Anthony wants to be a part of this, and the club have got a top player there.”