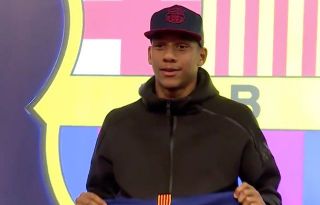 Barcelona unveiled new signing Jean-Clair Todibo on Thursday night, and revealed which shirt number the starlet will take at the Nou Camp.

As noted by the club’s statement, the 19-year-old was expected to arrive at Barcelona in the summer when his contract expired at Toulouse.

However, the Catalan giants have opted to accelerate the switch, perhaps with the fact that he has been frozen out of the first-team squad in recent weeks in mind, and so now he’ll begin the process of settling and acclimatising at his new club, with new teammates and environment in the coming months.

As seen in the video below, the youngster was unveiled on Thursday night with his official presentation to come on Friday, while there was big news in the form of his squad number being revealed.

It comes with a lot of pressure given club legend Xavi recently wore it, but the Frenchman will don the No.6 jersey at Barcelona and he’ll hope to live up to expectations moving forward.

Time will tell how immediate of an impact he can make, as ultimately it might take a settling in period to adjust to the style of play and culture at Barcelona. Nevertheless, the club certainly believe in his qualities, as shown in their decision to fast-track his move rather than waiting until the summer.