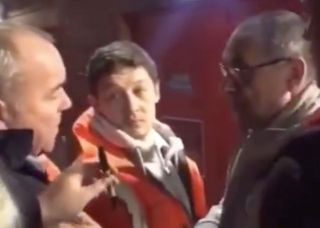 After their shock 4-0 loss at Bournemouth on Wednesday night, it’s understandable that Chelsea fans were far from impressed with their side.

The heavy defeat ensured that the Blues fell out of the top four on goal difference, and after the fall-out from their loss to Arsenal just a couple of weeks ago, it certainly wasn’t what boss Maurizio Sarri wanted to see.

As noted by the Telegraph, it has been reported that the Italian tactician kept his players in the dressing room after the game for crucial talks amongst themselves, and they’ll hope that they were productive and it will lead to solutions being found to their current issues.

However, that was of little consolation to the Chelsea fans who travelled to the game, with one in particular taking his opportunity to express his anger at the performance as Sarri left the stadium, as seen in the video below.

To his credit, the Chelsea boss stopped and seemingly listened to what he had to say before he can be heard apologising several times for the display and result.

It appeared to satisfy the fan in question who may have appreciated the exchange, but the only way to keep the fans happy now is to produce a reaction on the pitch when they host Huddersfield at Stamford Bridge on Saturday afternoon.

Sarri apologising to the fans and then leaving in a car and not the team bus…. @AlexGoldberg_ @CFCWriter pic.twitter.com/Tey9Gzvn5G