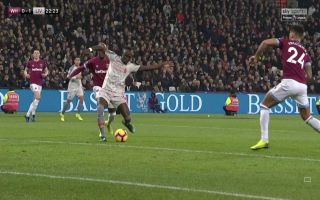 Sadio Mane fired Liverpool into the lead against West Ham United at the London Stadium in the Premier League on Monday night.

The Reds are aiming to restore their five-point lead at the top of the table over reigning champions Manchester City with a win against the Hammers, but it has been a difficult evening for them so far.

They got off to a great start, however, as Mane finished brilliantly to put Jurgen Klopp’s men in front after 22 minutes after James Milner fired in a low cross from the right-hand side.

The Senegalese star expertly controlled the ball before dispatching his 11th Premier League goal of the season, despite the fact Milner was clearly offside in the build-up.

West Ham have equalised since through Michail Antonio, in a highly-charged affair which could have plenty more twists and turns yet.

Check out a video of Mane’s goal and Milner’s controversial role in the opener below, via Twitter.

Apologies there is no sound. Can’t stand Alan Smith. Voice goes through me. But a great goal by Mane. Bring on number 2.#YNWA pic.twitter.com/coiPqVwztw

#WHULIV How linesman looked the other way to allow Sadio Mane goal pic.twitter.com/67Ic2Hp9Bn