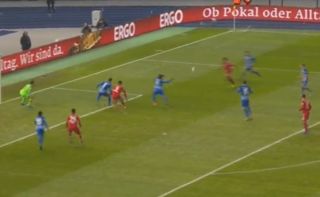 Just a reminder that it really wasn’t that long ago that the German winger was offloaded by Arsenal after barely any playing time.

Watch the video below and see just how good Gnabry has got since moving to the Bundesliga, and why these Gunners fans on Twitter are now gutted they didn’t keep hold of him.

Arsenal could really do with a player of his talent now as they struggle towards another disappointing season, with players like Alex Iwobi first choice in Unai Emery’s side without really doing much to deserve it.

Just watched Serge Gnabry score a terrific goal against Hertha Berlin. Why did we let him go to Bayern? @Arsenal @SergeGnabry @HerthaBSC

Thinking about how much Arsenal could use someone like Serge Gnabry right now.

Not even bummed that we don’t have Gnabry, but the fact we let him go for €5m. Why don’t we ever abuse the loan system? Just extend his contract and loan him out. We fucked up hard on him

Remember when iwobi/Walcott was better option than gnabry at arsenal good old times ?