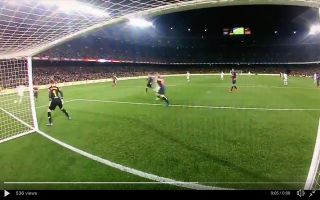 Real Madrid have taken the lead in El Clasico after just five minutes thanks to a lovely assist by Karim Benzema, the Frenchman has been Madrid’s main man this season.

Santiago Solari’s decision to start talented youngster Vinicius Junior paid off almost straightaway, the young Brazilian drew Pique out of his position and the Spaniard tried to stand up the winger but Vinicius created some space for himself before launching an audacious cross to the far post.

Karim Benzema did the rest, the Frenchman produced a lovely touch to get past Jordi Alba, before firing a low cross into the box which was tapped in by Lucas Vasquez.

Benzema’s pass was inch-perfect and the 31-year-old is continuing to prove that he is capable of filling Cristiano Ronaldo’s boots, by producing the goods for Los Blancos on a consistent basis.

Barcelona have been thrown by Madrid’s early goal and they will have to play catch up after their defence’s lapse in concentration.