According to the Evening Standard, Barcelona weren’t willing to take the risk with starting Messi tonight and Ernesto Valverde has shown faith in the rest of his team with his team selection, whilst also making that he has the five-time Ballon d’Or winner at his disposal if need be.

In quotes obtained by the Standard via Gol, Barcelona’s assistant manager Jon Aspiazu had this to say on the decision to start Messi on the bench:

“We didn’t want to take any risk. Messi is 100%, but we preferred for him to start on the bench. He could come on at any moment.”

This could prove to be a smart decision by Valverde and his coaching staff, there really is not much point in throwing Messi into the deep end if he isn’t full fit, especially when there is a second leg to be played to decide who goes through to the Copa Del Rey final. 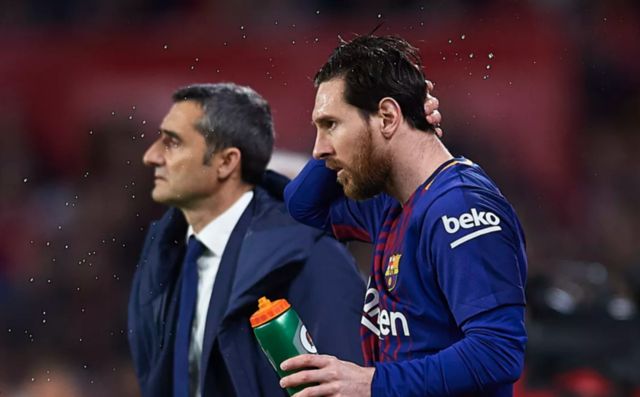 Messi also missed the first meeting between the two sides this season, but his teammates showed that they didn’t need him when they thrashed Madrid 5-1.

Even if Messi doesn’t feature for the Blaugrana tonight against Madrid, he’ll have a plenty of opportunity to do so in the coming weeks.

The second leg of the Semi-final will be played on February 27 at the Santiago Bernabeu – Madrid will host Barcelona once more, just three days later when the sides meet in their second league encounter of the season.

This Copa Del Rey Semi-final clash will likely determine the winner of the competition, it’s unlikely that Valencia or Real Betis will be able to pull of an upset against the Spanish giants in the final of the cup.

The Copa Del Rey means so much more to Barcelona this season, the Blaugrana are chasing history in their pursuit of the cup. The Catalan side have won the trophy four times in a row and are looking to make it a fifth this season, this would be a new record.