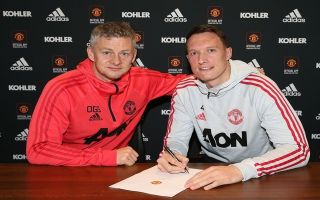 Manchester United have announced this morning that England international centre-back Phil Jones has signed a new contract with the Red Devils until 2023.

According to United’s official website, the 26-year-old has signed a contract that will keep him at Old Trafford until June 2023, the club will also have the option to extend Jones’ new deal by a further year.

United signed Jones in the summer of 2011 for a deal reported to be worth up to £17m by BBC Sport. United signed the fresh-faced youngster after his impressive performances led to Blackburn’s Premier League survival in the 2010/11 season.

Jones has gone on to make 208 appearances for the Red Devils across all competitions whilst also winning 27 caps for England.

Check out United’s announcement below:

We are pleased to announce @PhilJones4 has signed a new contract with #MUFC.

Many Manchester United fans were shocked with the club’s decision to hand this deal to Jones, the defender has made some costly mistakes whilst playing for United and fans are wondering how the star has won himself a new deal.

With all due respect, Jones has been mediocre for United so it’s surprising to see him sign a new contract – which is likely on much better terms than his previous deal.

A new 4 year deal for what exactly? How are these mediocre players still at the club, truly embarrassing. While you’re there, offer Valencia & Mata +5. Mind-blowing.

Banter era is not over lads.

Please tell me youve been hacked?

Arguably the worst defender the club has but let’s pay him more pounds whilst dishing out horrible performance and memes.

How has he pulled this off?

This club is a meme.

For what can’t we afford or attract new defenders why still hang around the old lads. We need fresh young defenders.

Fucking hell, bring back McNair and give him one too