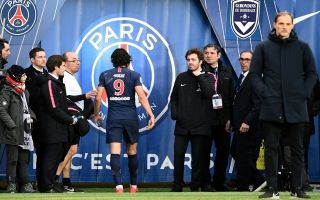 Manchester United have been handed a huge boost ahead of their Champions League clash against PSG on Tuesday, Edinson Cavani was forced off with an injury.

Cavani was left clutching his thigh right on the stroke of halftime and the Uruguayan was forced off. Cavani was injured just three minutes after opening the scoring for PSG, by scoring a penalty.

PSG could be without two of their dangerous attacking trio and Kylian Mbappe may have to shoulder the attacking responsibility for the French giants in Manchester on Tuesday night.

Brazilian superstar Neymar is already sidelined with a serious foot injury, according to the Telegraph, the tricky attacker will miss both legs of the Round of 16 clash vs United.

PSG will also be without midfield maestro Marco Verratti, the Italian played 59 minutes of PSG’s win today before being brought off, but with the star just returning from an injury he could also be a doubt for Tuesday.

Even if Verratti does play on Tuesday, the 26-year-old could find it hard to deal with the intensity of the matchup given his lack of match fitness.

PSG could even be without right-back Thomas Meunier, the Belgian was brought off after 80 minutes after a clash of heads.

Here’s a video of the star coming off with the injury:

This could be a huge boost for Man Utd ?

Edinson Cavani limped off for PSG after scoring a penalty… pic.twitter.com/J7HzC0s7RH