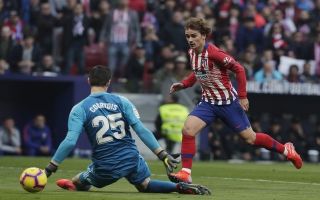 These Real Madrid fans slammed Thibaut Courtois for his poor goalkeeping after Antoine Griezmann scored for Atletico Madrid this afternoon.

After a Atletico counter-attack, the Frenchman embarrassed Courtois by slotting the ball through his legs. Courtois rushed off his line, in an attempt to make himself big (he’s already 6ft8) but in doing so the Belgian left his legs wide open and Griezmann wasn’t going to turn down this opportunity to get one over the former Chelsea stopper.

Unfortunately, Courtois being nutmegged is quite a regular occurrence, the Belgian just can’t find a way to stop this from happening – especially when he’s on the big stage.

Courtois hasn’t had the best start to life in Madrid since joining from Chelsea last summer and many fans are surprised to see three-time Champions League winner Keylor Navas play deputy to the Belgian after his poor form.

Our goalkeeper is useless, Navas would have saved that… #HalaMadrid

Courtouis is a joke ..

And Solari still chooses the giraffe over Navas? pic.twitter.com/gHJliVb2nh

Coutois is not lasting another season

Courtois is trash. Another goal through his legs man… fucking sell him…

Sell Courtois and replace him with a brick. The guy’s awful

Here’s some reaction from the rest of the football world to the goal:

Never known a keeper to get nutmegged as much as Courtois

Courtois needs this to save his career pic.twitter.com/Gjf0DaxCIx

Courtois spread his legs a country mile to make himself big. Griezmann just popped it between them.

The greatest love stories of all time:

?The Notebook
?Titanic
?Romeo and Juliet
?Twilight
?Courtois and a nutmeg pic.twitter.com/ZsXpbenVID

Courtois when he sees the opponent's attacker moving towards his goal: pic.twitter.com/PBCDlARBcD

Courtois and nutmeg goals. Name a better duo, I will wait!!

This is why snakes aren’t meant to have legs.#ReptilesOut

Why does Courtois get nutmegged all the time lol