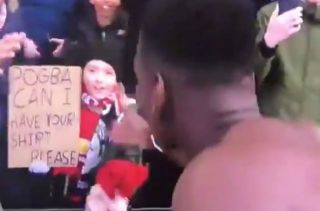 Paul Pogba is showing his class on the pitch currently, and the Man Utd superstar matched it off it too with this classy gesture following the win over Fulham.

The Frenchman scored twice in United’s 3-0 win at Craven Cottage, a result that takes them into the top four in the Premier League ahead of Chelsea’s trip to Man City on Sunday.

That’s now eight goals and five assists in just nine Premier League games since Ole Gunnar Solskjaer took charge, as the Norwegian tactician appears to be getting the best out of not only his midfield superstar, but the rest of the squad around him too.

However, there was a great moment after the game as Pogba made his way back to the dressing room, as he stopped to give his shirt to a young Man Utd fan in the front row of the away end.

Equipped with a sign specifically requesting his shirt, the youngster wasn’t left disappointed as Pogba spotted it and made his way over.

Couldn’t be at the game but delighted to see ?@paulpogba? granting this request ?#pogba pic.twitter.com/vo9w1mwK0k