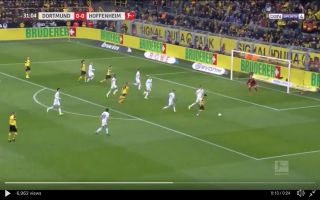 Teenage sensation Jadon Sancho is continuing his takeover of the Bundesliga, the youngster has been Dortmund’s main threat vs Hoffenheim this afternoon.

Sancho opened the scoring for Dortmund in the 31st minute of the tie, the youngster picked up the ball on the edge of the box and used his expert footwork to create some space before scoring from an extremely tight angle.

The Hoffenheim defence are playing catchup when it comes to tracking Sancho, just ten minutes after scoring Sancho stormed down the left wing before cutting in and firing a shot towards goal.

The England international’s shot was parried away and Mario Gotze tapped the ball into the back of the net to give Lucien Favre’s side a two-goal lead.

The clash between the two sides epitomises the success that English youngsters have had in Germany, Sancho’s close friend and Arsenal attacker Reiss Nelson is on the bench for Hoffenheim this afternoon.

Jadon Sancho is a cheat code.

Check out Sancho’s run which led to Gotze’s goal: