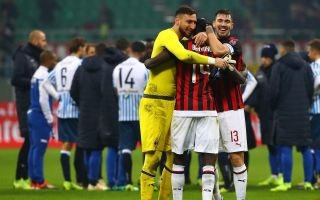 Chelsea are reportedly eager to seal the transfer of AC Milan midfielder Franck Kessie as part of any deal that would see Tiemoue Bakayoko leave.

The Blues currently have Bakayoko loaned out to Milan after a difficult spell at Stamford Bridge last season, and he could now be quite likely to make a permanent move to the San Siro after looking back to his best in Italy.

However, the Daily Star claim Chelsea will attempt to use this as a bargaining chip as they eye up Kessie to bolster their midfield options.

The 22-year-old could be an ideal addition for Maurizio Sarri’s side, who have fallen away with a dip in form lately, largely due to Jorginho being unable to keep up his early-season form.

Chelsea also sold Cesc Fabregas to Monaco in January, while Mateo Kovacic is only at the club on a season-long loan from Real Madrid.

Kessie looks a top young talent who could do well in the Premier League and give Sarri more options in his CFC squad.

Still, the Daily Star note that the deal could be a tad complicated as Kessie is on loan at Milan from Atalanta and the Rossoneri have an obligation to buy him permanently this summer.