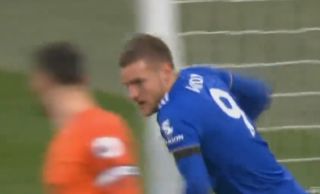 Jamie Vardy finished off a superb flowing team move by Leicester City to make it just 2-1 to Tottenham in today’s Premier League clash at Wembley.

The former England international pounced from close range inside the box to halve the deficit for the visitors, giving the Foxes a late lifeline against Spurs.

This followed a spell of quality possession and passing from Leicester, who completely opened their opponents up with this fine move.

Vardy applied the finishing touch in the end, making up for his earlier penalty miss to continue a strong scoring record against the big six…