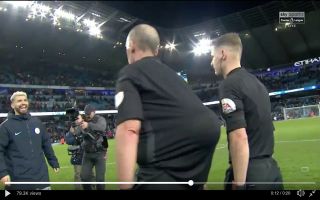 After his record-breaking performance today, the match ball that Sergio Aguero was set to receive at the end of today’s match, will arguably be the most cherished of his career – Mike Dean made sure that the prolific Argentinian doesn’t forget about him though.

Dean hid the ball in the back of his shirt once the final whistle blew, sparking a heartwarming exchange that football fans may never have realised that they’ve needed.

Aguero was left bamboozled when Dean pulled out the ball from the back of his shirt and handed it to him, now the match ball from one of Aguero’s most dominant, record-breaking performances in his career…

Will be covered in the back sweat of Mike Dean. We all watch football for moments like this.

Check out Mike Dean at his best below:

This wasn’t the only bit of antics from Dean today, take a look at this:

The world wouldn’t be the same without Mike Dean. pic.twitter.com/hoU1aApb6C

Amidst all of this it’s about time Chelsea realise that they’ve actually been embarrassed today and the club have been made out to look like a joke after City ripped through them with ease.

Video: ‘He must be calm’ – Thomas Tuchel sounds a warning to Chelsea star ahead of Palace test
More Stories mike dean Sergio Aguero