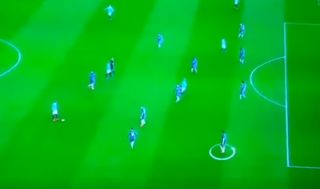 Chelsea left-back Marcos Alonso has been slammed for his role in Manchester City’s first goal in their Premier League clash yesterday.

In case you somehow missed it, City thrashed Chelsea 6-0 – and, worst of all, it arguably flattered the visitors.

Alonso had a real shocker on the first Raheem Sterling goal, as shown in this video clip below.

The Spaniard for some reason drifts centrally, leaving acres of space for Bernardo Silva on the right flank, which leads to his ball eventually finding its way to Sterling for an easy finish.

Please, please tell me why on earth Marcos Alonso is shuffling towards the middle!

I need answers, my arteries can’t take it. pic.twitter.com/0SQSBgwr1W

Unsurprisingly, these Chelsea fans were furious with Alonso, who isn’t exactly Mr Popular at Stamford Bridge these days anyway.

Here’s some reaction to the defender’s performance…

This is ANOTHER perfect showing of Marcos Alonso’s defending ability. Shite https://t.co/FvXVxUMa4V

How is this man still a footballer, I'm honestly sick and tired of his shit. Consistently dreadful. LEAVE MY CLUB

Marcos Alonso everyone, someone please tell me what the hell Sarri see’s in him? pic.twitter.com/qbzReDxNGF

Marcos Alonso must be cerebrally challenged, right? Not a chance you can’t get away with this at any top club. pic.twitter.com/bHMAz9K8AY

3 minutes into the game and #MarcosAlonso is already out of position that led to the first goal, how do someone even tries to defend his performances when he himself cannot defend…….
I'm not putting all the… https://t.co/Cbd7GfwYHj

I’m not even overreacting, Marcos Alonso is the worst LB in the league