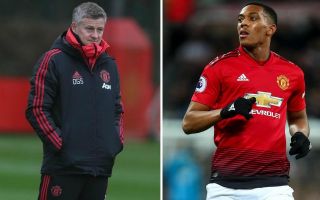 Manchester United star Anthony Martial has confirmed he and his team-mates would like Ole Gunnar Solskjaer to stay on as manager permanently.

The France international, speaking at a press conference today alongside Solskjaer, praised the style of play the club have adopted under the Norwegian and aimed a dig at the tactics of his predecessor Jose Mourinho.

MORE: Man United in advanced talks over €230m transfer of superstar to be the face of their new project

Martial has been in superb form this term, particularly since Solskjaer replaced Mourinho, and it’s little surprise to see the 23-year-old admit he and others in the squad prefer the team’s more attack-minded approach now.

MUFC have long had attacking traditions under the legendary Sir Alex Ferguson, but made a number of poor managerial appointments following his retirement.

None of David Moyes, Louis van Gaal or Mourinho really bought into the club’s history in the same way as Solskjaer, who is a club legend from his time as a United player.

It’s clear he’s now becoming an increasingly popular choice for next Man Utd manager, though he’s only currently in his role until the end of this season.

Solskjaer himself has not given much away about his future, despite one report from the Sun stating a decision has been made to keep him on.

Here are Martial’s quotes, courtesy of Chris Winterburn on Twitter:

Martial, “Well we’ve now got a coach with different intentions; a different approach. Perhaps it’s easier for us to play this style of football than the one of the last coach.”

Martial on Solskjaer staying, “Well obviously things are going really well at the moment and we’re pleased to have him with us, so yes, we’d like him to stay.”

Martial on Solskjaer asking him to do different things to Mourinho, “He’s asking me to attack more, that’s my job after all. He’s asking me to be more decisive. I can only say we all continue to play like this.”