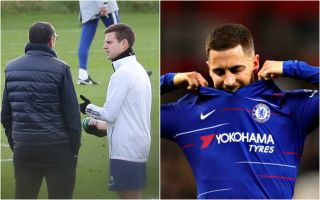 Chelsea players have called on Maurizio Sarri to make two big changes to his team at the moment after the Blues’ recent slump in form.

CaughtOffside understands the Chelsea squad held a crisis meeting after the 6-0 humiliation at Manchester City on Sunday.

MORE: 7 ideal candidates to replace Maurizio Sarri if he gets sack at Chelsea, including ex-Blues boss, club legends or raid on PL rivals

While it’s emerged that one of Chelsea’s summer signings is being quite vocal about regretting his move to Stamford Bridge, CaughtOffside also understands the playing squad are fairly united in wanting N’Golo Kante moved back into his preferred defensive midfield role.

As well as that, many have made it clear they feel young forward Callum Hudson-Odoi deserves more playing time than he’s been given after some promising cameos this season.

Kante being moved into a more attacking role has certainly been one of Sarri’s more puzzling moves as CFC manager, with the Italian tactician not showing much flexibility in the way he sets his sides up.

Despite being a big hit at Napoli, his methods don’t seem to be working in the Premier League, and he’s been urged to reconsider his use of a player widely regarded for some time as being the best defensive midfielder in the world.

Kante was instrumental to Leicester City’s title win in 2015/16, and again with Chelsea in 2016/17 when he also won PFA Player of the Year for his all-action displays in front of the defence.

The France international then won the World Cup with his country last summer and, despite his best efforts, has not managed to adapt to being used further forward.

Hudson-Odoi, meanwhile, was notably linked with Bayern Munich in January and there is the feeling inside the club that he’s an elite young talent that must be kept on at the club and utilised.

Willian’s form has been unconvincing in attack this season and CaughtOffside understands players have communicated to Sarri that they feel Hudson-Odoi should become more of a regular.

The England youth international has looked the real deal when used, but Chelsea don’t have the best track record of promoting from their academy in recent times.

However, having lost top young players like Mohamed Salah and Kevin De Bruyne earlier in their careers, the club would do well not to risk the same happening with Hudson-Odoi, who could well follow in their footsteps and leave only to shine elsewhere.

Various stories are going around regarding Chelsea at the moment, with the Telegraph also reporting of unrest within the squad.

They claim Sarri seems to be losing his authority, while his habit of smoking on the training ground also bemused players earlier this season.

Meanwhile, the Times report that the former Napoli boss wants big changes to this squad in the summer transfer window as he does not view his current crop of players as being right for his tactical philosophy.