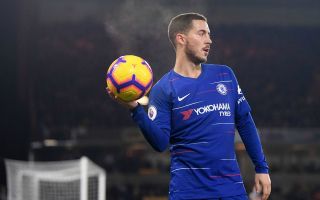 Despite the Spaniard having a pretty poor season at Stamford Bridge, it seems he has admirers at the Bernabeu as a summer move is talked up by AS.

The report admits that a deal for Alonso could be a bit more complicated than one for Hazard due to the players’ respective contract situations, but one imagines Chelsea fans would be pretty pleased if they could offload the 28-year-old.

Having initially shone as a wing-back in Antonio Conte’s system that saw Chelsea stroll to the Premier League title in 2016/17, Alonso has since gone downhill, particularly after being moved into a more orthodox left-back position by new manager Maurizio Sarri this season.

Alonso was shown to be badly at fault on Manchester City’s opening goal on Sunday, leaving a number of CFC supporters furious.

It could be that the former Fiorentina man would do better back in his native Spain, as he is perhaps in need of a fresh start after becoming rather unpopular with his current fans.