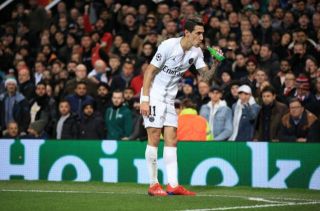 Angel Di Maria produced a decisive performance in PSG’s win over Man Utd on Tuesday night, and he even had time for a beer!

The Argentine ace was booed by the home faithful throughout the first leg of the last-16 encounter in the Champions League at Old Trafford, after a disappointing spell with the Red Devils previously.

However, he silenced them in the best way possible with two assists in his side’s 2-0 win, as they take a commanding lead into the second leg next month with two away goals.

As seen in the video below, as Di Maria waited to take a corner, a bottle of beer was thrown onto the pitch and the 30-year-old decided to pick it up and pretend to take a swig before throwing it to one side.

Based on his performance and the result for PSG, he may well treat himself to a beer or two following the game as United’s treatment of their former star undoubtedly backfired.

Ángel Di María on his return to Manchester:

With their Champions League tie looming, Koeman and Barcelona have been riled by PSG’s gamesmanship yet again
More Stories Angel Di Maria