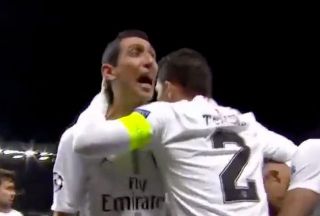 After being jeered by the Man Utd fans throughout their clash with Paris Saint-Germain, Angel Di Maria ended up rather enjoying his return to Old Trafford.

The Argentine produced two assists as the Ligue 1 champions secured a 2-0 win in the first leg meeting of the last-16 tie, and as seen in the video below, he certainly enjoyed celebrating the first.

After whipping in a corner which found Presnel Kimpembe to tap home the opening goal, the PSG players began celebrating in front of their own supporters.

However, with the home faithful directly in front of him too, Di Maria had a few choice words as he can clearly be seen having a rant while Thiago Silva looks to drag him away.

Nevertheless, he wasn’t done having a decisive impact as he produced another great delivery for Kylian Mbappe to double PSG’s lead, while as seen in the image below, he even had time to pick up a bottle of beer thrown onto the pitch and pretended to have a taste.

After an underwhelming stint at United, Di Maria came in for some stick from the Old Trafford faithful, while he was also on the wrong end of an Ashley Young shove in the first half which saw him fly off the side of the pitch.

However, it’s fair to say that he had the last laugh on this occasion…

Ángel Di María enjoyed that one on his return to the ground ? pic.twitter.com/wxFsOjMPGF

Di Maria told the United fans to f*ck off ??? pic.twitter.com/9bYtIWxUFF

With their Champions League tie looming, Koeman and Barcelona have been riled by PSG’s gamesmanship yet again
More Stories Angel Di Maria