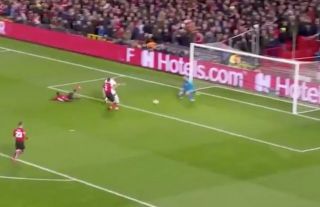 Paris Saint-Germain doubled their lead at Man Utd on Tuesday night, with Kylian Mbappe finding the back of the net after a lightning-quick counter attack.

The Ligue 1 champions took the lead just minutes earlier through Presnel Kimpembe, and they wasted little time in taking full control of the tie.

As seen in the video below, after winning possession back they attacked swiftly to find Angel Di Maria down the left flank, and the Argentine produced a brilliant delivery into the box to find his teammate.

However, a great deal of credit goes to Mbappe too, as his pace and movement got him into a dangerous position to apply the finishing touch, and he showed great composure to direct his effort past David de Gea.

Given the absence of Neymar and Edinson Cavani, many expected to see PSG struggle in the final third against an in-form Man Utd side.

Thomas Tuchel’s men had other ideas though, producing two clinical moments to put themselves in a great position in the last-16 tie.

His pace is frightening!

A clinical finish as well… His 23rd goal this season ? pic.twitter.com/PehkjPLIcj