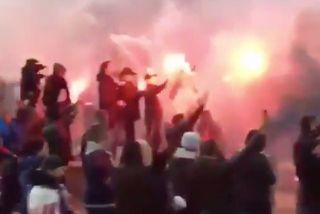 Paris Saint-Germain take on Man Utd in the Champions League on Tuesday night, and the French giants will have a noisy backing at Old Trafford.

As seen in the videos below, a strong contingent of PSG fans have made the trip to Manchester, as they were filmed marching through the city centre with flares and blasting out chants.

It all appears to be in good spirits which is the most important thing, as ultimately it’s quite the spectacle when the top clubs from around Europe get such a passionate following on their travels and everyone behaves.

Both sides will be desperate to take an advantage into the second leg in the French capital next month, as Ole Gunnar Solskjaer’s men will undoubtedly hope to extend their unbeaten run under the Norwegian tactician which now stretches to 11 games across all competitions.

Not only will Man Utd have to deal with the quality on the pitch, it sounds as though the PSG supporters will certainly make their voices heard inside the stadium when the game gets underway.

PSG ultras now in full voice – Liverpool fans will tell you, they are something special! pic.twitter.com/SMFOlI0jwk