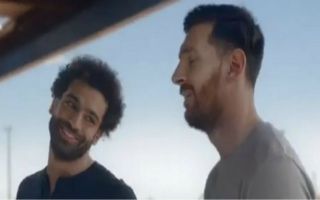 The two men have been in scintillating form for their respective clubs this season and they may be tough to separate when it comes to who wins this year’s Golden Shoe award for the most goals scored in a major European league.

Salah has hit 17 goals in the Premier League so far this term, while Messi has 21 in La Liga and their impressive campaigns have earned them both a role in Pepsi’s new marketing campaign.

The Egyptian star takes on the Argentine maestro in a superb trick-shot challenge during the 30-second advert, as they compete for the final Pepsi bottle at a petrol station in the desert.

4 years ago he was playing for Fiorentina and now he’s doing adverts with Messi. ? pic.twitter.com/PXXWAK0XRL

Who would have thought a few years back that Mohamed Salah of Basel would go all the way up, become one of the most marketable footballers in the world and share such an advert with Lionel Andres Messi? because I sure haven’t. pic.twitter.com/08Qj0Z2UE7