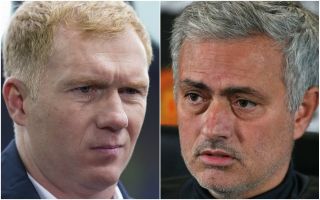 Having been highly critical of Jose Mourinho during his time in charge of Man Utd, Paul Scholes is expecting to get some back in the coming months.

As noted by BBC Sport, the United legend was appointed as Oldham boss this week, as he embarks on a new chapter in his career in football.

After a glittering spell as a player at Old Trafford, he was then a regular pundit on British TV, and was often heard being particularly critical of what he was seeing from his former side under Mourinho.

In his defence, Scholes was simply being honest about a club that he undoubtedly holds close to his heart, and perhaps was speaking as a fan more than anything.

Results and performances under Mourinho undoubtedly left the Portuguese tactician open to that criticism, prior to his departure from Old Trafford in December.

However, Scholes expects Mourinho to take his chance to respond if results aren’t going well at Oldham, but insists that they won’t bother him as he won’t take much notice of what pundits in general say about his tenure at the club.

“I have never really understood why players and managers take notice of what pundits say anyway. They are just giving an opinion on the game and get paid for doing so.

“If anyone wants to have a dig at me, I won’t be taking any notice. The only person I answer to is the owner.”

Time will tell whether or not the 44-year-old is a success on the bench, but given the experience that he accumulated as a player and the knowledge that he would have gained from Sir Alex Ferguson, it does set up an intriguing experience at Oldham.