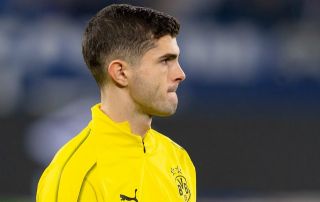 It’s fair to say Christian Pulisic is not making a great first impression on the fans who’ve watched him for the first time tonight.

The USA international is in action for Borussia Dortmund against Tottenham at the moment, with the Bundesliga side losing 1-0 against Spurs at Wembley at the time of writing.

Pulisic started the match but has been pretty anonymous, in what is not proving an ideal audition for the youngster ahead of his transfer to Chelsea in the summer.

As noted by BBC Sport, the Blues secured the signing of Pulisic back in January, with the 20-year-old now technically back on loan at Dortmund.

Of course, this is just one game, and a difficult one at that, but it seems Chelsea fans and others are not impressed by how Pulisic has performed tonight.

In fact, Twitter is now mostly made up of people mocking the west London giants’ business as they suggest the American may have been a big waste of money…

Chelsea have absolutely wasted their money on pulisic lmao

How much did Pulisic cost again? ?

Pulisic is a nothing player. Chelsea should ask for their money back

How did Chelsea manage to go to Dortmund and buy Pulisic for that amount of money when Hudson-Odoi isn't even making their squad?!

Chelsea really paid all this money for Pulisic? dude has been trash all game..

Also spare a thought for the Chelsea fans watching this and wondering how they're sinking all this money into Pulisic.

How tf is Pulisic still on this pitch?? Is this what Chelsea spent money on??