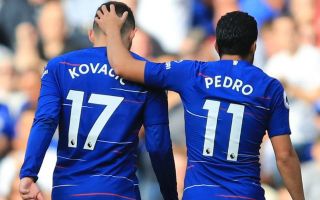 Chelsea winger Pedro has admitted it can be difficult to play to Maurizio Sarri’s tactics, despite insisting he and his team-mates do fully understand them.

The Spaniard was speaking to the press ahead of Chelsea’s next game in the Europa League against Malmo tomorrow night, and let slip that all may not be well with the Blues under their current manager.

CFC notably lost 6-0 to Manchester City at the weekend – their worst defeat of the Premier League era – and this also followed a 4-0 loss to Bournemouth and a 2-0 loss to Arsenal in their last two games on the road.

It’s fair to say that, with Roman Abramovich’s record of sacking managers, Sarri’s future has now come under plenty of speculation in the last few days.

The Italian tactician hasn’t looked the best fit at Stamford Bridge, and this quote from Pedro (via Nizaar Kinsella below) perhaps won’t be the biggest help for him right now as he looks to convince both pundits and his employers that his philosophy can work.

Pedro on Sarri's philosophy: "All the team follows the idea of Maurizio. It is simple. Stay high, compact, create chances, keep possession and create chances. The team knows this but it can be difficult to play this way, it depends on the other teams, City played well" #CFC #UEL