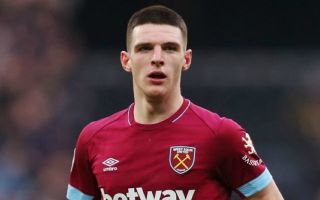 West Ham midfielder Declan Rice has announced on Twitter that he’s asked to transfer his international registration to England over the Republic of Ireland.

In a lengthy statement, the youngster explains what a tough decision this has been for him due to his growing up in London but being very attached to his Irish roots.

Rice, still only 20 years of age, has been one of the most exciting young players in the Premier League this season.

Controversially, he has also represented Ireland at youth level, winning 20 caps for them across spells with their Under-16s right up to Under-21 level.

Rice also won three senior caps for Ireland but now says he’s asked to be able to play for England instead, though he also insists he’s taking nothing for granted in terms of a potential future call-up for the Three Lions.

This follows a lengthy saga surrounding the young midfielder, but this now looks very good news indeed for England fans as he’s clearly a player with a big future at the highest level of the game.