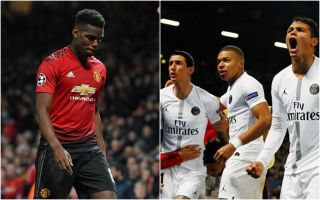 Paris Saint-Germain midfielder Julian Draxler aimed something of a dig at Manchester United’s players after their 2-0 Champions League win at Old Trafford.

The Germany international spoke after the game and admitted he and his team-mates were glad that Paul Pogba got sent off and would miss the second leg.

It wasn’t the best night for Pogba as he saw red late on, but Draxler feels the France international is United’s best player by some way.

So much so that he says it’s already good news for PSG that he won’t be playing in their next meeting, suggesting he doesn’t particularly rate the ability of the rest of this Man Utd squad to get a result.

‘For me Paul is the best player of Manchester United,’ Draxler told the Guardian.

‘A very important player for the team and you could see he is fantastic.

‘That is why we are very happy he will not play the second leg.’

This was the first time United lost a home game in Europe by more than one goal, and it certainly gives Ole Gunnar Solskjaer’s side a mountain to climb when they travel to the Parc des Princes.