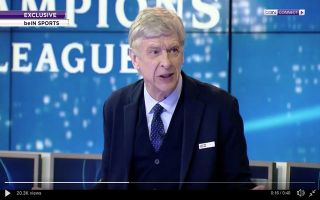 Former Arsenal boss Arsene Wenger has revealed that he ‘tried to sign’ this wonderkid whilst he was at Arsenal, the ace has went on to establish himself as one of the world’s brightest youngsters in the last six months.

Wenger revealed that he ‘tried to sign’ Borussia Dortmund star Jadon Sancho, the 69-year-old made the revelation on beIN Sports, the retired boss was a guest on beIN’s show that was covering this evening’s Champions League fixtures.

Sancho is the latest in a long line of stars who the Gunners had the chance to sign when they were younger, it’s well known that the north London club were close to signing the likes of Zlatan Ibrahimovic, Gareth Bale and Cristiano Ronaldo before they found their superstardom.

Here’s what Wenger had to say on Arsenal’s pursuit of Sancho:

Sancho’s decision to make the leap to the Bundesliga after deciding to leave Manchester City, has done wonders for the 18 year old’s career.

The winger has been fast-tracked from England’s youth ranks to the senior team in a matter of months, after catching the eyes of fans and pundits alike with his impressive performances for Dortmund.