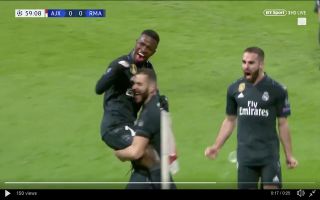 Karim Benzema has given Real Madrid the lead in the 60th minute of the first leg of their Champions League knockout tie against Ajax.

Talented youngster Vinicius showed his amazing dribbling ability when he cut inside the box from the right-wing, going past three of Ajax’s players in the process. The teenager then smartly laid the ball off to Benzema and the Frenchman scored with a lovely first-time finish.

Benzema’s strike was thunderous and it rattled the goal, the 31-year-old has silenced all of his critics this season by taking the mantle as Real Madrid’s ‘main man’ following the shock departure of Cristiano Ronaldo in the summer.

Brilliant assist from Real's teen star and the holders lead in Amsterdam ? pic.twitter.com/Ks0Fcm1mYh

Ajax will be kicking themselves, the Dutch giants have been made to rue the chances they missed in the first-half of the encounter.