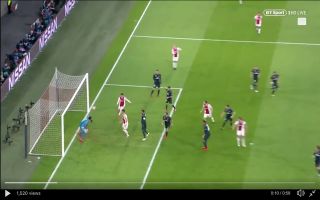 Real Madrid stopper Thibaut Courtois was a very fortunate man this evening after VAR ruled out a goal for Ajax goal that came after some shaky keeping by Courtois.

In the late stages of the first-half Courtois spilled the ball after a header from Ajax captain Matthijs de Ligt, following a corner.

Ex-Southampton ace Dusan Tadic was then deemed to have interfered with Courtois from an offside position, this allowed Nicolas Tagliafico to loop a header over the Belgian.

Upon looking at a replay of the incident, the decision to disallow the goal was the right one – the margins were as fine as they can be and Madrid will be extremely grateful for the fact that VAR is being used.

This is the first ever decision that has been overturned with VAR in the history of the Champions League.

Check out the disallowed goal below:

He drops a clanger, Ajax score, only to be saved by VAR.

It's the first goal disallowed and overturned by VAR in Champions League history. pic.twitter.com/3cvukMUCvv

Thibaut Courtois is very happy that VAR is being used in the Champions League knockout rounds… ?pic.twitter.com/4CnyZIZY4s

Courtois even spoke highly of VAR before today’s game, how fitting that this was in place to stop the Belgian from becoming public enemy No.1 in Madrid:

Courtois at pre-game presser: "I like VAR. Sometimes you need to know the rules and fans watching perhaps sometimes don't. It’s there to help football. Sometimes it goes against you, but in order that football is fairer, it’s good to have it."

Ajax have dominated Madrid in the first-half of this clash, Real Madrid certainly aren’t at the races so far – actually, Los Blancos look like they’re away with the fairies.