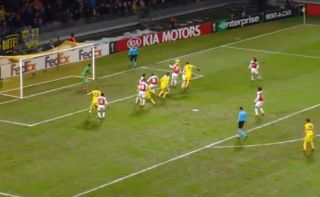 Arsenal conceded a poor goal on the stroke of half time to go 1-0 down away to BATE Borisov in the Europa League this evening.

It’s not been a convincing Gunners display by any means, with BATE clearly sensing an opportunity to spring an upset on their opponents.

Watch the goal video below as Stansilav Dragun headed in from a set-piece, getting between Arsenal’s defence far too easily and also beating goalkeeper Petr Cech.

That's a big standard save for any goalkeeper.. No excuses that's just brutal! #Arsenal #cech

How bad has petr Cech become… ?

Cech please stay in Belarus don’t come back to the Emirates.