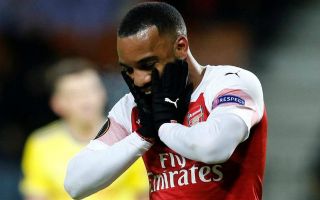 The France international lost his head in the closing stages of the game as he swung an elbow at an opponent and instantly received his marching orders from the referee.

Lacazette certainly deserved to be sent off for the offence, and has apologised for his behaviour on Twitter, though he says he couldn’t stay calm in that precise moment.

The former Lyon man went on to say he still believes the Gunners can progress without him in the second leg of this tie.

Letting the team down like that is the worst feeling..
I should have stayed calm but it’s not always easy.. Sorry ?
There are still 90 minutes to play and I believe that my teammates will make it to the next round.. #COYG #Laca

Arsenal will certainly hope they can produce something better when they host BATE at the Emirates Stadium, with a team of this calibre surely good enough to get a fairly convincing win against these relative minnows.

It will be a bit trickier without Lacazette in their side, however, with the 27-year-old proving one of their best players this season.