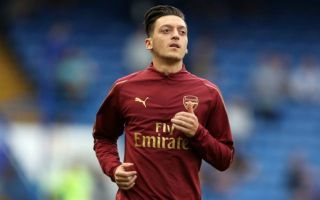 Arsenal star Mesut Ozil has spoken out on Twitter following the club’s 1-0 defeat to BATE Borisov in the Europa League this evening.

The German playmaker was a notable absentee for the Gunners as they suffered this surprise setback that leaves them with a nervy second leg encounter at the Emirates Stadium to come.

Ozil has found himself out of favour with Unai Emery for much of this season, having previously been near-undroppable under former manager Arsene Wenger.

It remains to be seen if Ozil will be playing in the second leg, but the 30-year-old took to Twitter to express his disappointment at the poor result and hope for a better one next time.

Not the result we wanted, but we still can do it in the 2nd leg and reach the next round! Let's bounce back at the Emirates especially for our fans ??? #COYG ?? #M1Ö #BATARS #UEL @Arsenal

It seems Ozil remains fully focused at Arsenal and not tempted to use his social media accounts to cause too much of a stir by taking digs at the manager for not playing him.

Still, Arsenal fans will be keeping an eye on him and hoping he can get back into the team soon as, for all his flaws, they look a lot worse without him in it at the moment.