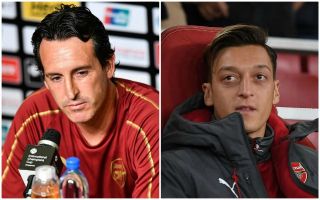 Arsenal manager Unai Emery gave a rather worrying response to questions about Mesut Ozil today after his team’s shock 1-0 defeat to BATE Borisov in the Europa League.

The Gunners were poor as they suffered a surprise first-leg loss against BATE, though many will still surely expect them to go through with a win at the Emirates Stadium.

Performing like that is not good enough for a team like Arsenal, however, with Emery sure to be under growing pressure as he doesn’t look enough of a step up from Arsene Wenger at the moment.

The Spanish tactician also deserves scrutiny for continuing to leave Mesut Ozil out of his team, with the German playmaker barely featuring this season for no obvious reason.

One of the finest creative players in Europe on his day, Ozil could surely add something to this out-of-sorts Arsenal team, but Emery’s response to questions about the 30-year-old suggest he’s not tempted to change his ways.

When asked about missing Ozil’s creativity in his press conference, Emery said, as quoted by football.london: ‘Today those that were here, we can win with them and we deserved that.

‘Last week we won and we played with the same players. No different performance. We deserved to win but didn’t get the result. They were very organised.

‘Not for one player or another. We can win with every player and lose with the same players.’