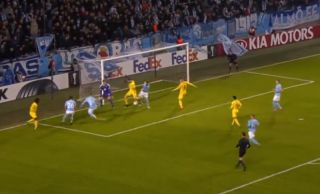 Chelsea striker Olivier Giroud scored with a deft touch to make it 2-0 to the Blues away to Malmo this evening and surely kill off the tie.

Maurizio Sarri’s men will already have been big favourites to progress past the Swedish minnows, and with two away goals the second leg at Stamford Bridge is surely a mere formality.

Giroud could have done with a goal after a lack of impact this season, with the France international at least showing here that he can be a useful rotation option for the Europa League.

Ross Barkley and Willian also did well in this fine breakaway move by Chelsea: