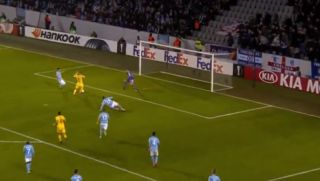 Ross Barkley has atoned for his error and poor performance at Manchester City with the opening goal for Chelsea against Malmo tonight.

The England international did well to get into the box and take down a Pedro cross before neatly guiding the ball into the back of the net to make it 1-0.

That’s a crucial away goal for Chelsea in the context of this tie in the Europa League, and it’s an important personal moment for Barkley as well after a recent dip in form.

The former Everton man got a header badly wrong that led to a goal for City in that 6-0 defeat, but he’s now made amends with this well-taken effort: