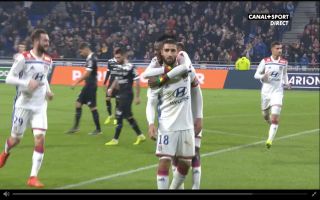 In the 35th minute of Lyon’s Ligue 1 clash with Guingamp, star man Nabil Fekir set the stadium alight with a sensational solo goal to hand Lyon the lead.

The move started with a inch-perfect pass from Houssem Aouar, Fekir brought down the pass with his chest before showing off a lovely touch to control the ball. The 25-year-old then curled a shot into the top corner, making the whole play look absolutely effortless in the meantime.

In December it was revealed by The Mirror (via L’Equipe) that the Blues had opened talks with the French side over the playmaker’s signature, of course a deal has so far failed to come to fruition, but with the star’s continued impressive performances – one of Europe’s big clubs could come calling to Lyon in the summer.

Nabil Fekir, that is just rude!

Fekir scoring a worldie again. Im not hurt at all #OLEAGpic.twitter.com/TyOa1BJ5GB

Fekir has impressed for Lyon in the Champions League as well as domestically this season. The versatile attacker has scored 3 goals in 5 appearances and he’ll be hoping to turn in an impressive performance against Catalan giants Barcelona in the second leg of their knockout tie.

The World Cup winner is suspended for the first leg of the tie, which will be played on Tuesday night.