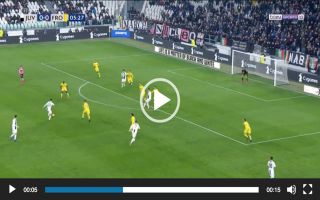 Juventus striker Paulo Dybala got the ‘Old Lady’ off to a flying start against Frosinone in this evening’s Serie A clash. Dybala scored an absolute cracker in the 6th minute.

The Argentinian picked up the ball from around 30 yards out after Cristiano Ronaldo laid the ball off to him, it’s astonishing to see that Dybala only looked up for a second before firing the ball into the top corner.

The goalkeeper had absolutely no chance saving this.

Dybala … Pick that 1 out!! pic.twitter.com/2EKDc4rdUf

Dybala and Ronaldo are forming quite the partnership, the Juventus faithful will be hoping that their two superstars will be in clinical form for Wednesday night’s Champions League clash against Atletico Madrid.