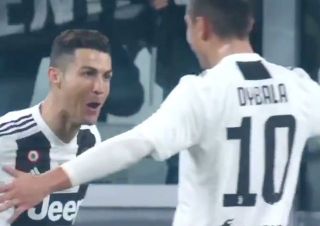 Juventus secured a comfortable 3-0 win over Frosinone on Friday night to stretch their lead at the top of the Serie A table to 14 points.

Both Cristiano Ronaldo and Paulo Dybala got on the scoresheet, with the latter hoping to put a disappointing campaign on a personal level thus far behind him.

With a trip to Atletico Madrid in the last-16 stage of the Champions League next week, the Bianconeri will hope that the pair are finding their form together just in time for the business end of the campaign, and it certainly seems as though they’re getting on just fine.

As seen in the video below, the attacking duo have now paired up their respective trademark celebrations, as they celebrated in the same manner for both goals.

That’s now 21 goals and 11 assists in 32 games for Ronaldo so far this season, and if he can strike up the perfect partnership with Dybala in the coming months, it could certainly help the Turin giants land a Serie A and Champions League double.