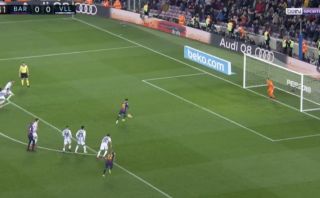 Lionel Messi kept his calm from the penalty spot this evening, as the Argentine handed Barcelona the lead against Real Valladolid at the Nou Camp.

Barca, and Messi, have been well below average for tonight’s clash, however the Blaugrana are to go into half time with the lead after Messi converted from the spot.

The penalty was awarded after Gerard Pique was fouled in the box, as Messi hammered the spot kick home to open the scoring just before the break.

You can check out Messi’s goal below. Cool as you like from the Argentine!

? | #BarçaValladolid | Messi's goal from the spot.