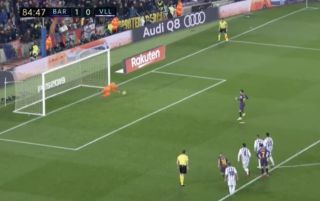 Lionel Messi didn’t have the best of days for Barcelona today despite scoring in the first half, as the Argentine saw a spot kick saved by Real Valladolid ‘keeper Jordi Masip.

Masip was one of the star performers of the match on Saturday evening, as the former Blaugrana star stopped nearly everything that came his way during the 90 minutes.

Masip’s best moment of the game came in the second period, as the Spaniard kept out Messi from the spot after Philippe Coutinho was fouled in the box.

It’s Messi’s first penalty miss of the season, and we’re sure it’s one that the forward is going to want to forget in a hurry.

You can check out Messi’s penalty below. Not like him, that’s for sure…

Silky work from Coutinho and Suarez won Barcelona another penalty…