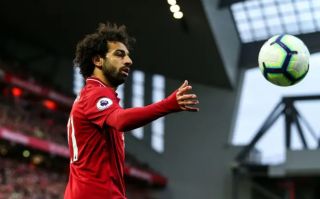 Liverpool may be planning for life without Mohamed Salah as transfer rumours hot up over the Egypt international ahead of the summer.

The Reds won’t want to lose their top scorer, but it seems it’s going to prove harder and harder for them to hold on to the in-demand star, who was already the subject of links with Real Madrid and Barcelona last summer.

MORE: Real Madrid close in on quality transfer ahead of Manchester United, Liverpool and Arsenal

Liverpool have an unfortunate history of seeing their biggest names poached by Spain’s big two in recent times, particularly Barcelona, where the likes of Javier Mascherano, Luis Suarez and Philippe Coutinho have ended up going in recent years.

The latest is that Salah is wanted by Juventus, though the Italian giants could at least offer £105million-rated forward Paulo Dybala in return, giving LFC a ready-made replacement up front.

Meanwhile, another £105m-valued player, Joao Felix, is also being linked with Liverpool ahead of the summer.

If Salah is to leave, one imagines Liverpool could receive a good amount of cash to spend on revamping their squad, so perhaps landing Dybala and Felix to replace the former Roma man is not beyond the realms of possibility.

And while Salah’s departure would be a big loss for Jurgen Klopp, the German tactician might also be pretty happy to end up having top talents like Dybala and Felix alongside Sadio Mane and Roberto Firmino at Anfield.