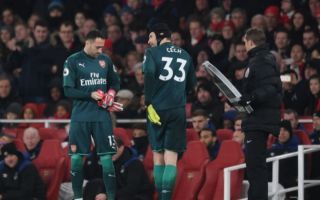 According to Don Balon, current back-up to Courtois, Keylor Navas, has decided to seal a move away from the Santiago Bernabeu, with the shot-stopper already in contact with a number of the world’s top clubs regarding a move.

The report also notes that Real have singled out Ospina at the ‘perfect’ option to be back back-up for Courtois, with the Colombian international willing to play second-fiddle to Courtois in the Spanish capital as well.

Ospina has been a good servant for both Napoli and Arsenal in the past few years, with the Colombian shot-stopper impressing for both the Gunners and the Italian giants.

During his time with the north London side, Ospina, who’s currently on loan in Naples as per Napoli’s official website, has managed to keep a total 27 clean sheets in 70 games for the club, a fantastic record when you take into consideration the Gunners’ defensive troubles in recent seasons.

The 32-year-old has found his first team minutes limited since the arrival of Courtois, with the shot-stopper only managing to clock up a total of 13 appearances in all competitions this term, with most of these coming in the Copa Del Rey.

Losing Navas will be a bitter blow for Los Blancos to take, as by seeing the Costa Rican international leave, they’d be losing one of the best ‘keepers on the planet.

But, by signing Ospina, Real would be softening the blow of losing Navas, even if it were only a little bit…