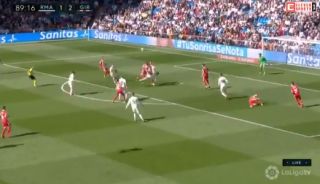 Real Madrid captain Sergio Ramos was sent off for the 25th time of his career today as his side fell to a shock 2-1 home defeat to Girona.

But was this a tad harsh on the Spaniard, who seemed to be attempting a fairly innocent overhead kick as Los Blancos pushed forwards late on.

Many players have attempted similar, and though Ramos perhaps raised his foot dangerously high as it skims an opponent’s head, there’s surely no malicious intent here.

Is this an example of Ramos being judged more harshly due to his reputation?

This is how Sergio Ramos earned his 25th career red card.

Getting a yellow card for attempting to score an overhead kick shouldn’t be a thing, should it?pic.twitter.com/G9zixe3yO7