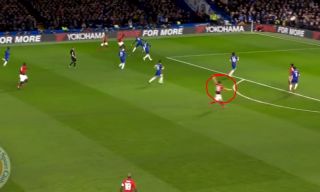 Manchester United have taken a 1-0 lead against Chelsea in tonight’s FA Cup clash at Stamford Bridge, with Ander Herrera heading in the opener.

Paul Pogba picked the Spaniard out with a superb cross, though Chelsea’s defence were totally missing in action as Herrera made a lengthy run totally unmarked to break into the box.

Herrera then finished well and his strike gives United the advantage, and piles more pressure on to Maurizio Sarri’s Chelsea after a dire recent run of form.

An exit from the FA Cup tonight would surely spark more talk over the Italian’s future, with Herrera doing the damage, but the Blues’ defence doing themselves no favours…