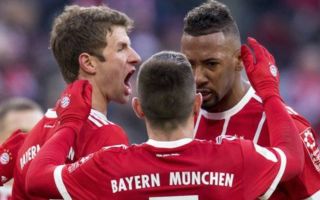 Bayern Munich defender Jerome Boateng hasn’t travelled with the squad for their clash with Liverpool in the Champions League on Tuesday night.

The Bavarian giants will face the Reds at Anfield this week in the first leg of their last-16 tie in the Champions League.

However, as noted by Sky Sports, Boateng has been ruled out due to illness, and didn’t travel with the rest of the squad as they flew to England on Monday morning.

The 30-year-old has played a limited role so far this season, making just 19 appearances in all competitions.

Coupled with the fact that he has been left on the bench for four of the last five Bundesliga outings, that would suggest that coach Niko Kovac won’t miss his presence too much.

Nevertheless, he has featured heavily throughout the Champions League so far this season, completing 90 minutes in five of the six group stage games.

With that in mind, it will surely be a blow for the Bundesliga champions to be without the experienced defensive ace as they look to secure a positive result to return home with an advantage.

Mats Hummels and Niklas Sule started in the heart of their backline in the 3-2 win over Augsburg on Friday night, and so it would seem as though that pairing could be used again on Merseyside this week.

It’s added by Sky Sports that Franck Ribery didn’t travel with the squad either after becoming a father, but he is expected to join up with them before Tuesday night.